On May 9, Young Thug was arrested on charges of participation in street gang activity and conspiring to violate the Racketeer Influenced and Corrupt Organizations (RICO) Act. Today (June 2), the rapper was denied bond by Judge Ural D. Glanville following a seven-plus hour bond hearing in Atlanta, as Variety and The New York Times’ Joe Coscarelli report. Thug’s trial is currently set for January 9, 2023.

Judge Glanville denied Young Thug bond, claiming he’s a potential danger to the community and witnesses. “There has been significant proffers about Mr. Williams being a danger to the community,” Glanville said. “In particular, the state’s proffer that they have taken proffers from other gang members—people who are in this particular indictment and others who are not in this indictment—that he is the leader of the gang, he is dangerous and if he crosses them he’ll kill them or their families.”

On May 23, Gunna—who was one of multiple alleged gang members named in the RICO indictment—was also denied bond after pleading not guilty to conspiracy to violate the RICO Act. His trial is also scheduled to begin on Monday, January 9, 2023.

Thug and Gunna were named in a grand jury indictment that was released on May 9. The 56-count indictment named a total of 28 alleged members and associates of Thug’s label and imprint YSL (aka Young Slime Life, Young Stoner Life, and Young Slatt Life). Among those indicted were Yak Gotti, Peewee Roscoe, Duke, and Thug’s brother Unfoonk. The indictment defines YSL as a “criminal street gang” founded in 2012 with an affiliation with the Bloods.

While all 28 defendants were charged with conspiracy to violate the RICO Act, Thug and Gunna’s co-defendants face additional charges including armed robbery, aggravated assault, drugs and weapons charges. Yak Gotti and four others were charged with murder for the January 2015 death of Donovan Thomas, Jr., who is described by prosecutors as “a rival gang member.” Young Thug is also accused of renting a car that was later used “in the commission of” that murder.

Documents included YSL-related songs, videos, social media posts, and lyrics that have been deemed “an overt act in furtherance of the conspiracy.” Examples include the Young Thug and Juice WRLD collaboration “Bad Boy.” The indictment also pointed to Gunna’s video for his Lil Keed collaboration “Fox 5,” claiming that Gunna was wearing chains that read “YSL” and “Slatt” in the visual. Prosecutors argued that his wardrobe in the video and the lyric “We got ten-hundred round choppers” amount to “an overt act in furtherance of the conspiracy.”

Following the initial RICO charges, Young Thug was hit with seven additional felonies days later. Thug was charged with possession of marijuana with intent to distribute; possession of a Schedule III, IV, or V controlled substance with intent to distribute; possession of a firearm during the commission of a felony; possession of a sawed-off shotgun, sawed-off rifle, machine gun, dangerous weapon, or silencer; and three counts of being a person employed or associated with a criminal street gang to conduct or participate in criminal gang activity through the commission of a crime. The charges arrived after police raided the rapper’s home in Atlanta’s Buckhead neighborhood.

Young Thug’s attorney Brian Steel has denied the rapper’s involvement in the alleged criminal activity. “I’ll tell you the response to any allegation is Mr. Williams committed no crime whatsoever and we will fight to my last drop of blood to clear him,” Steel told WSB-TV in May. When reached by Pitchfork, Steel added, “Mr. Williams has committed no violation of law, whatsoever. We will fight this case ethically, legally and zealously. Mr. Williams will be cleared.”

Pitchfork has reached out to Young Thug’s representatives for further information and comment. 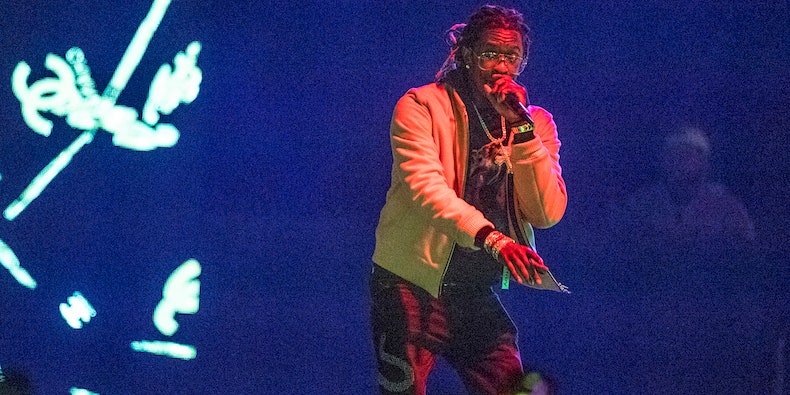