It took Coi Leray a decade to figure out who she wanted to be. At 14, she released her first two songs, “Bow Down” and “Rock Back,” on a YouTube page belonging to her father, former rap media mogul Benzino. Both songs aped the rigid pop-rap aesthetics of hits like Wiz Khalifa’s “Black and Yellow” and Flo Rida’s “Right Round,” and when Leray returned with 2018’s “G.A.N,” it was a stark rebrand: Her voice, high-pitched and athletic, leaned heavily on melody—in the vein of a then-rising generation of SoundCloud stars—and kiss-offs to trifling men. It wasn’t exactly unique, but as she began dropping singles and EPs and became a fixture on social media, her plucky energy became harder to deny.

Leray’s biggest looks yet came last year when her singles “No More Parties” (with Lil Durk) and “Big Purr” (with Pooh Shiesty) exploded online. Their success felt like vindication after years of growing pains, industry skepticism, and Leray’s increasingly rocky relationship with her father. On “Hollywood Dreams,” the opening song of her full-length debut, Trendsetter, she addresses her haters directly: “It’s funny how they sit back behind they computers/And be so quick.” The song is a moment of reflection, a balance of drinking the pain away and summoning the courage to face her insecurities. Paranoia and anxiety are relatively new feelings in Coi Leray’s music, and they frequently clash with her otherwise boisterous and unfazed personality. Leray isn’t exactly subtle—song titles include “Paranoia” and “Anxiety”—and her bluntness is both a blessing and a curse, depending on what type of song she’s aiming to make.

Across 20 tracks, Leray tries out several trendy sounds: Sad Guitar Rap (“Heart in a Coffin,” “Mustard’s Interlude”); the Moody New York Anthem (“Mountains”); the Plucky Pop Hit (“TWINNEM”); the obligatory stab at an Afrobeats Crossover (“Aye Yai Ya”). She never lacks for energy, but her double act of brash bruiser raps and melodic honesty fits better against some sounds than others. Her staccato croons don’t gel on the G Herbo-assisted “Thief in the Night,” but her straightforward raps fare better over the Chicago drill of solo cut “Box & Papers.” Sometimes, like on “Heartbreak Kid” and the first half of “Anxiety,” she channels Death Race for Love-era Juice WRLD. It can feel like an auditory dressing room, unworthy styles hitting the floor or the return rack.

There are a handful of moments where Leray lands on a style that fits. Out of all the album’s guests, she works best with the ones who came up during the SoundCloud era, whose smooth cadences she’s clearly studied. On “Clingy,” a scorned-lover ballad featuring the Canadian rapper Nav, Leray switches between singing and rapping with ease over a minimal jingle and crisp 808. Her sing-song fits neatly over the colorful synths of “Mission Impossible” and the silky piano of “No More Parties,” mixing well with vocals from Lils Tecca and Durk, respectively. She doesn’t sound like an opportunist searching for her next hit: The appeal is natural.

One of the album’s most impressive feats comes on the second verse of “Anxiety,” after the sprightly hook, when Leray kicks herself into triple-time to keep pace with the hectic beat: “Yeah, you tried to break me/I could never let it faze me/I gotta learn to embrace it/Won’t let it change me, even when life get crazy.” Her flow sounds inherent, unforced, and confident. As a whole, Trendsetter is too wide-ranging and unfocused to scan as the proper debut she aspires for it to be. But when she does lock in, her mission couldn’t be clearer. 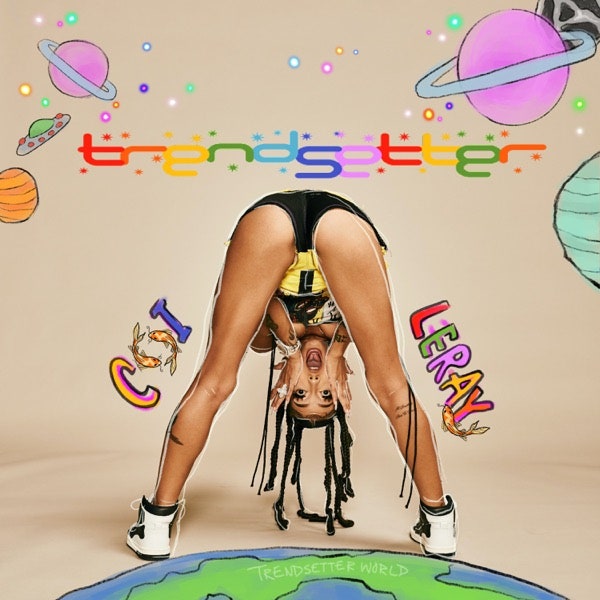