The album’s production, helmed by guitarist Alex Robertshaw, is at least immaculate. Every sound is treated as delicately as in minimal techno, as though each was made to stand out on it own; the littlest synth line sparks, and the guitars gleam like a galaxy made of candy. Higgs’ vocals are clean and processed, his emotion as raw as a 3D-printed steak. It’s one of the only elements that really nails the band’s man-meets-machine brief.

“Jennifer,” with a wiggly, romantic New Order guitar line, is a particular highlight. In the verses, Higgs presents his protagonist: Jennifer, a suicidal woman and possible victim of domestic violence, who longs for an escape while all the exits appear sealed off. The despondency of the verses is balanced with a hopeful refrain, as Higgs encourages her to keep looking for a way out. With no brainy modular synths or cyborgian conceits involved, it’s one of the few songs that isn’t overwrought, and, incidentally, the only one that confronts trauma with a human heart.

Yet there’s no saving the album’s second half. “Metroland,” a sci-fi-meets-country track, keeps you at a barge pole’s distance with its kitschy schmaltz and nonsense lyrics: “Kevin can you imagine it?/The escalator breathing in a hydra bowl,” Higgs sings. Then there’s “Shark Week,” which contains frankly unforgivable lines like “He’s Obama in the streets but he thinks he’s Osama in the sheets.” You’d hope that these were the work of the AI. Perhaps they’re just an excuse to bring in some sort of interesting gadgets: Higgs told Apple Music that Robertshaw suggested that he write a song using certain chords, “because he had this special synth that did cool stuff with chords that had four notes in them.” Higgs tries to balance the zaniness of the verses with seemingly heartfelt refrains (“Do you think you got everyone under your control? When you haven’t got anyone, anyone at all”), but the sticky-sweet choruses merely curdle amid all that would-be acid wit.

Raw Data Feel might be the most confident album Everything Everything have ever released, but in a way that feels deeply hubristic. If this album were a person, it’d be that pompous, motormouthed philosophy undergraduate who treats seminars like extended soliloquies—believing in his ability to impart Earth-shattering truths, despite not really saying much at all. That guy can be endearing; he’s energetic and has an infectious interest in technology’s effects on the human spirit. But when it comes to expressing his ideas, much less his own emotions, he’s got a long way to go—not unlike the neural net Higgs used to write his lyrics. Everything Everything: Raw Data Feel 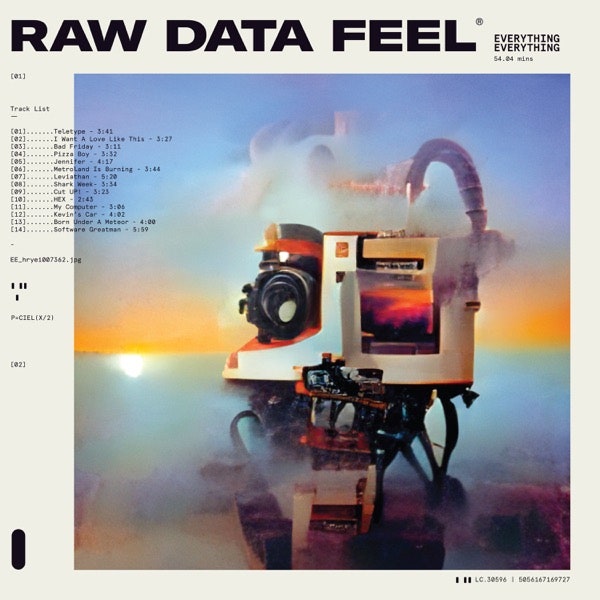