It’s been four years since A$AP Ferg declared Lil Uzi Vert “the new Blink-182,” and three since Blink ditched their guitars for synths. But the one-time rapper Machine Gun Kelly, who won “Favorite Rock Artist” at last year’s American Music Awards, sees himself as a savior of pop-punk in its traditional sense: “It needed a face again,” he told Spin. If 2020’s Tickets to My Downfall was a love letter to his mall-punk predecessors, mainstream sellout is a bitter kiss-off, too busy defending himself against the genre’s gatekeepers to bother with the hooks and heartbreak that made his previous effort so surprisingly slick.

Machine Gun Kelly, born Colson Baker, is wading into a far more crowded pool than the one he left in 2020. He tapped Travis Barker to produce Downfall before the Blink-182 drummer became a professional studded-belt whisperer, adding a jagged edge to music from disaffected Hype House e-boys. Situated among his fellow Barker-ians, most of whom were in short pants when Blink first broke up in 2005, it’s understandable why the 31-year-old might feel a sense of ownership over the Zoomer-led Hot Topic revival. Barker joins MGK again on mainstream sellout, but this time, their pairing feels less inspired and more paranoid. These songs feel cut-and-pasted together from a grab bag of adolescent clichés and recycled three-chord solos; the eyeliner and lip ring seem even more like a costume when Baker opens the record with an impassioned “Why is it so hard to live?”

MGK and Barker aren’t exactly known for subtlety, but their latest collaboration is painfully prosaic to the point of meaninglessness. mainstream sellout never bothers to show you how twisted and broken Machine Gun Kelly is when it could just tell you: “I’m damaged,” he whines on “5150.” “make up sex,” featuring blackbear, is somehow more hollow than their collaboration on Tickets to My Downfall, mixing crass sexual references with such lyrics as, “I love chaos/I love toxic/I love wreckage/I love falling.” MGK leans into the worst tendencies of his Victory Records influences, blaming his rampant narcissism and misogyny on his exes and his vices.

Sure, there are suggestions of deeper traumas—late fathers, broken homes, forbidden love—but most of the album is cartoonishly rendered via graveyard walks and vague references to mental illness. “born with horns” and “god save me” feel thin to the point of approaching parody, like “Emo Kid” without a shred of irony. “emo girl,” a duet with fellow pop-punk revivalist Willow Smith, feels both too serious to laugh at itself and too absurd to take seriously. It does little to transcend its tropes and despite Smith’s admirably yelpy delivery, it still lands like a TikTok-ready meme. And while Baker’s vocal tics—“ums” and “yeahs” thrown in for emphasis—are catchy in spite of themselves, as a guitarist, he can barely bother with an original melody. “maybe” includes the requisite “Misery Business” interpolation and a metalcore verse from Bring Me the Horizon’s Oli Sykes for good measure. The distorted riff on “papercuts” sounds suspiciously like Green Day, but perhaps without the draw of controversy, Machine Gun Kelly didn’t feel the need to give them the same credit. 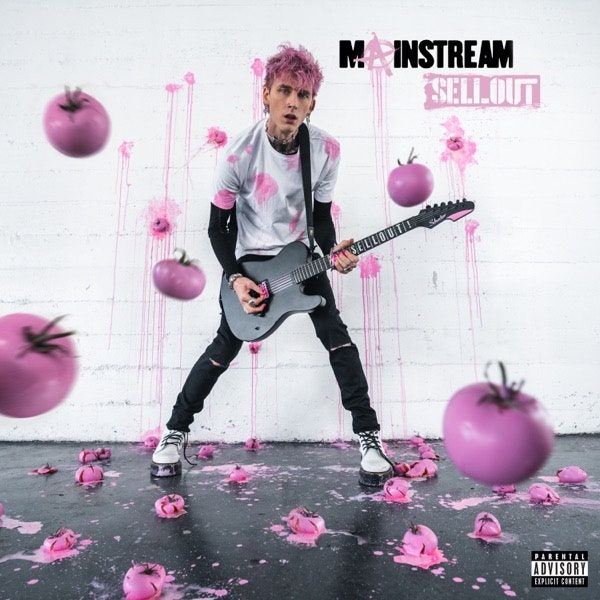