The three original members of D.C. band Flasher were uniquely intertwined—subtract or swap a player, and you risk drastically altering or destroying what made them so special in the first place. Their acclaimed 2018 debut album, Constant Image, was marked by a spring-loaded post-punk exuberance, their shared lead vocals, and patchwork-style lyrics written collaboratively as a trio. A few years after the album was released, bassist Daniel Saperstein departed the band, leaving guitarist Taylor Mulitz (formerly of Priests) and drummer Emma Baker to reform as a duo on their second album, Love Is Yours. The first iteration of Flasher was such a democratic and balanced three-piece that this situation raises the question: How do you move forward when an integral piece of you is missing?

Love Is Yours arrives four years after Constant Image, but Mulitz and Baker aren’t trying to replicate the magic. Instead, they opt for a more contemplative sound. Their first LP was so springy that, at times, it sounded like the coil might break. But their deliberate pace this time around means there are no tracks that verge on self-destruction. Like its predecessor, they utilize a lot of strange guitar and synth textures, giving the record a bumpy, staticky feel. Mulitz and Baker’s oh-so-smooth vocal arrangements come to the front and are a big highlight, providing a gauziness that pairs well with their sawtooth guitar tones and clamorous background ambiance.

Their electronic experimentation is more prominent on Love Is Yours—the album opens with a series of percussive hisses, and muffled frequencies are peppered throughout the album. On the latter half of “Damage,” Flasher pivot towards dark, whooshing electro-pop, and the instrumental “Pink” is a hypnotic blitz of contorted synths. Baker also takes on more lead vocal duties than before, excelling especially on the tender, wistful refrain of album opener “I Saw You” and the tongue-in-cheek punk delivery of the verses on “I’m Better.”

While Constant Image grappled with coping mechanisms amid the pervasive, immaterial tension that nags at the human spirit, Love Is Yours is about how to nurture (or discard) relationships that keep you sane during rough times. “Damage” and “Tangerine” capture the act of untethering from manipulative people, the former seemingly with a more clear-cut postmortem and closure, the latter with deeper, more emotional wounds. The title track describes the life-affirming connection that can result from a long-term partnership (“You got me missing what I didn’t know I need”) but also the landmines that appear once you know someone so intimately (“I’m steps behind you, saying the wrong thing again”). It communicates the frustration of not being on the same page with other people, but for all the record’s melancholia, the album ultimately revolves around an admirable devotion to oneself. “Give yourself back/Self-respect is knowing the odds/And seeing the cause and effect/And how could it be,” Baker sings in the album’s opening lines.

What Love Is Yours lacks is the same level of potency and lyrical sharpness as their debut. Gone are the explosive climaxes, the exhilarating pace and buoyancy that made Constant Image feel like such a strangely joyful listen. The way Flasher perpetually added and subtracted sonic layers on their first album also feels more seamless and impactful than on Love Is Yours. Their new lyrics don’t possess the previous record’s humor or clever wordplay and although they gain warmth through direct, vulnerable writing, they lose the satisfying connection they once had between their anxious guitar lines and agitated lyrics. Ignoring the shadow of its predecessor may be difficult, but Love Is Yours is still a compelling album of off-center power pop and is proof that the long-held bonds of Baker and Mulitz remain just as strong. Flasher: Love Is Yours 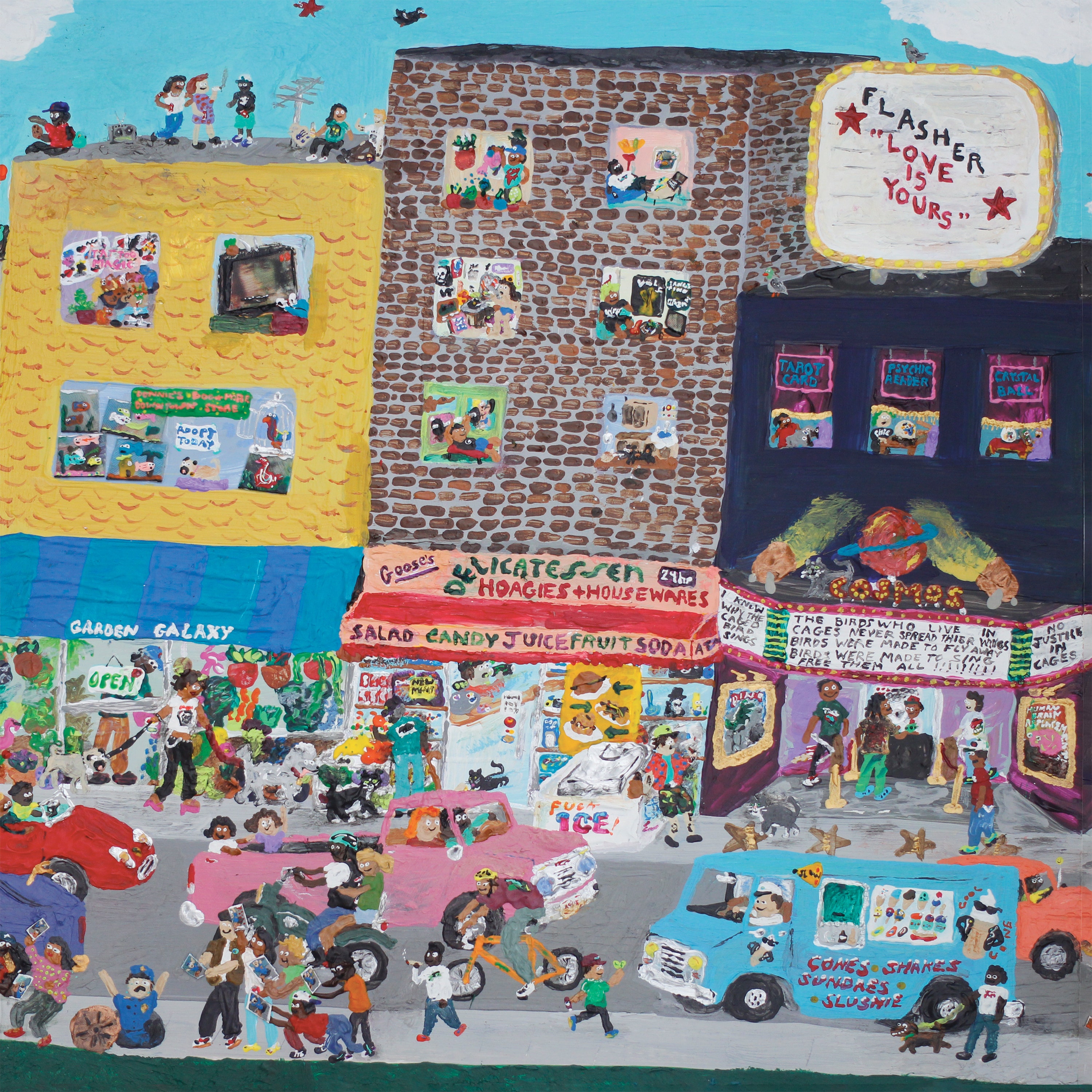