You don’t often think of shoegaze in terms of theatricality; the genre’s very name evokes the downturned eyes of a non-event. But New York-based duo k and Ryan Hover, of Candy Claws and Sound of Ceres, have always treated the style like a stage production. Across their oeuvre, symbolist plotlines animate an opaque, otherworldly sound: The deities Ceres and Calypso idyllically frolicked through Candy Claws’ Ceres and Calypso in the Deep Time, while Sound of Ceres’ The Twin led a journey through Thomas Mann’s The Magic Mountain. On Emerald Sea, the Hovers’ latter group takes their theatrical instincts to new heights. Formatted as an elaborate play in three acts, the record is narrated by Marina Abramović as the omnipresent Universe, who falls in love with the Roman deity Venus; their story plays out against a lush, empyrean backdrop.

On vocals, k plays the central role of Venus with fairy-like wonder, pursued by the Universe as they journey through the titular body of water and back into the sky’s void. Resplendent with harps and flutes, Emerald Sea’s arrangements evoke fantasy, echoing the Apples in Stereo’s rich psychedelia. “Deeper Surround” snakes through waterlogged reverb like a Mario water level, “Handlion’s Palace” thrums and crashes with tsunami-like force, and “The Glare” is imbued with simple dream-pop romanticism. “The Fawn,” the album’s strongest song, describes a flame-lit bacchanal in flickering images and gilded guitar flourishes. Delivered with a dark playfulness that reflects the title’s innocence, “The Fawn” makes the most of k’s voice; their voice sharpens to a fine point as they retreat into a cornered panic, exclaiming, “Come see where I am!”

But for all Emerald Sea’s ambition, the album’s texture is too sumptuous, like a heavy dish of foie gras. k’s breathy delivery rarely changes; to that end, even their uniquely ethereal tone eventually collapses into a grating background instrument. Occasionally, they vary their inflection for effect—during “2nd Star Shroud,” they drop to a reverent hush as they whisper, “Where I find you, moonlight child,” and on “Arm of Golden Flame,” their careful enunciation is genuinely cinematic—but for the most part, this immutability undermines the dynamism of the story. Even Abramović’s judicious Universe delivers her lines as if she’s reading off of cue cards for the first time. Similarly, the sound of Emerald Sea doesn’t hold enough musical variation to stretch across its manifold ideas. Where Sound of Ceres’ debut, Nostalgia for Infinity, drew on its members’ varied strengths, Emerald Sea seems to fall into the same complacent pattern as The Twin, where aesthetic eclipsed substance. Across the swollen strings, harp, and reverb, the magic begins to bleed into monotony. 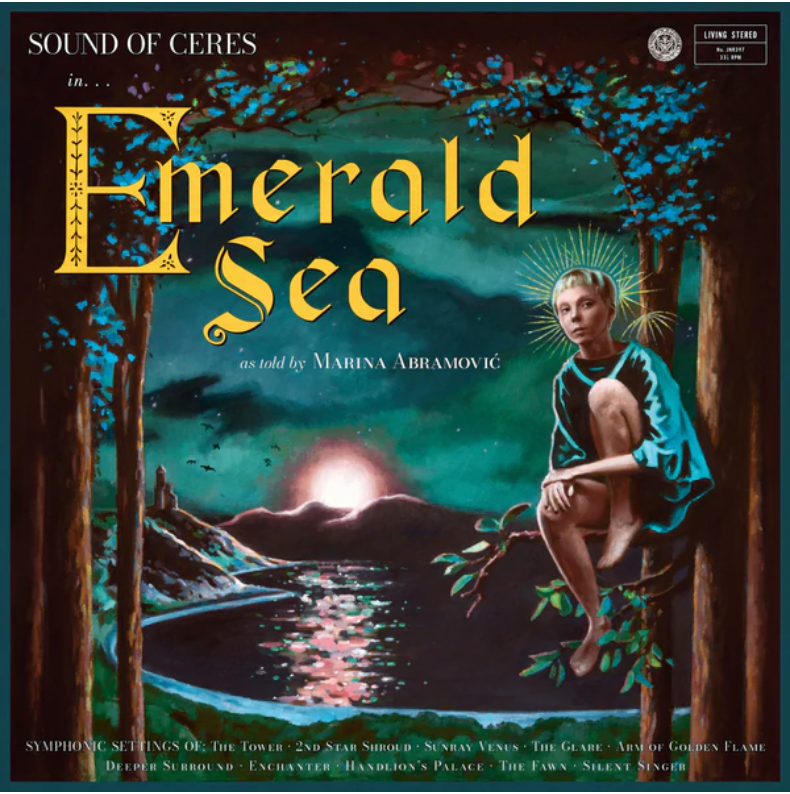